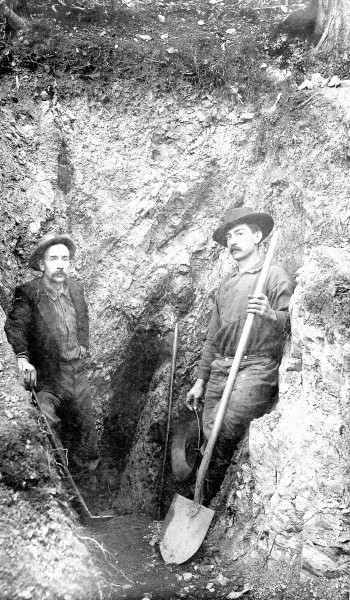 Joaquin Miller, who lived at Humbug during the 1850s, described a day in the life of a miner: “Now the smoke from the low chimneys of the log cabins began to rise and curl through the cool, clear air on every hand, and the miners to come out at the low doors; great hairy, bearded, six foot giants, hatless, and half-dressed. They stretched themselves in the sweet, frosty air, shouted to each other in a sort of savage banter, washed their hands and faces in the gold-pan that stood by the door, and then entered their cabins again, to partake of the eternal beans and bacon and coffee, and coffee and bacon and beans.”

T. J. Roach, a correspondent for the San Francisco ALTA CALIFORNIA, wrote in November 1851: “A few weeks ago I visited Shasta Butte City (Yreka). I was much surprised to find such a large town on the very frontiers of California. I counted over two hundred and fifty frame houses up and occupied during a stroll through the streets, and ladies, dressed a la ‘Bloomer’ perambulated the streets, showing a state of civilization quite unparalleled in these wild parts.”

In 1852, Jacob Wagner wrote to his sister and brother back in Iowa: “There are about four or five thousand persons in Shasta Butte City (Yreka) and within ten miles of here, some living in brush houses, others in tents…There are about 30 stores and about the same number of gambling houses and liquor shops. We are about 300 miles from navigation. The provisions we get here are packed 300 miles on mules… At present, flour is 25 cents a pound, beans 20 cents, coffee 50 cents, butter $1.25, boots from $8.00 to $16.00 a pair, potatoes 25 cents a pound, liquor 50 cents a drink.”

Often, people think that the mining era in California and in Western Siskiyou County came to an end after the Civil War or at least by the turn of the century.

From the SCOTT VALLEY ADVANCE of April 5, 1906, we learned that a multitude of mines were going strong. Most of these, of course, employed hydraulic mining practices and many employed crews of men. We’ve included excerpts here because it seems so much better to read about these activities in the “original text!”

From the South Fork of the Salmon, “the miners have an abundance of water, and are now operating their placer claims with good success.” The prospects were for a good long season, “as the mountains are covered with big bodies of snow.”

Peter Ostreid reported that he has been “packing ore to an arastra for crushing” and that the vein, though small, was rich, “from which several thousand dollars has been extracted in the past three years.

William Thompson “is prospecting the Deep Bank Gravel claim for the San Jose Company,” and this “is one of the deepest banks of gravel in the state.”

Simon Conzetti reported good results in “developing his quartz prospects” at Board Tree Gulch. In fact, he announced that he would be constructing “a small mill this summer” and that “he has several parallel veins of ore laying in shist, porphyry and granite walls.

The Salmon River Mining Company, operating the Petersburg claim, reported that they were “working a good crew of men night and day with two big monitors and an abundance of water.” Also near Petersburg, Charles Hillyer opened up a “quartz prospect” where he located a “large body of low grade ore that will be good property for a company with capital to work on an extensive scale.”

On Six Mile Creek, Charles Johnson announced that he “recently picked up a nugget weighting fifty dollars.” Also in the Six Mile ‘district’, “a tunnel is being run on the Ault and King quartz mine…that was recently bonded to Young and Janse.”

Near Cecilville, Pares and Maxwell were working the old Sightman claim. “They have their giants working with plenty of water, and should get good returns for their summer’s work.”

Ladd and Patten were working on a prospect on Horse Creek. “They have cut their ledge about 60 feet deep and have drifted 40 each way on the vein. The ore body is about 18 inches wide and will run near $30 per ton. They will probably put on a milling plant this fall.”

The Canyon Mountain Mining Company, owners of the King Solomon group of claims, “are enlarging their force of men, and getting ready to build the wagon road from Black Bear to the mine, and will then prepare to erect a large milling plant and cyanide works. The mine never looked more promising.”

Finally, Harvey Bowerman, owner of the Wild Irishmen group of mines near King Solomon, “is busy the past six months taking out ore, and has now a large quantity of high grade rock ready to mill as soon as he can pack the ore.”  ♦