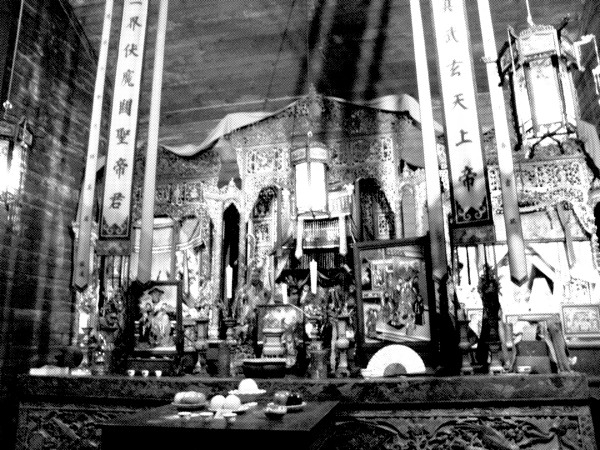 Photo of interior of the Joss House in Weaverville, California by Bob Pasero.

In “Part I” we looked at the history of Weaverville, author James Hilton’s “Shangri-La.” Today we will look at the various cultures that coexisted here during the gold rush and why it is unique in gold rush history. We will also examine factors that led to the monumental influx of “foreigners” to California. So, let’s get On the Road to Shangri-La Part II.

James Marshall’s 1848 gold discovery led to the largest migration in American history. Gold was the catalyst but not the only motivating factor fueling the migration. Other factors were at work in the mid 19th Century that led to California’s population explosion.

California’s 1848 estimated population was 157,000; 150,000 Native Americans, 6,500 of Spanish or Mexican descent (‘Californios’) and fewer than 800 non-native Americans. By 1860 that number would double; but why California and why 1849? Georgia had experienced a gold rush in 1828 and gold was discovered near the Pueblo de Los Angeles in 1842. So, the question remains; why California and why 1849? Historically, there are times ripe for mass migrations. That was the case in the middle of the 19th Century and that global convergence of time and circumstance is quite interesting.

1850 saw 60,000 new immigrants in California seeking gold; only 500 were Chinese. By the end of 1852, 20,000 Chinese had immigrated to California. The catalyst that caused the trickle to become a torrent was the T’aip’ing Rebellion (1850-1864). Southeastern China was devastated by poverty, starvation and ruin caused by the Rebellion. Twenty million people died during the Rebellion. By 1852 thousands of Chinese escaped that land of war, starvation, and unemployment. They came to California, comparatively, a land of milk and honey, rich with work, food, and peace.

Meanwhile, primarily in Bavaria and Prussia, but also reaching the British Empire, France and other areas, bloody class wars inspired by Karl Marx swept Europe. Coincident to the Marxist wars and the T’aip’ing Rebellion, the Irish Potato Famine was in full swing. A million people starved to death and another million fled Ireland. Many of them came to America. The mid 19th Century proved to be a “perfect storm” for immigration drawing people from around the world to California’s gold fields.

Weaverville had at least 5 “Towns” within the city. There were French, English, Irish, German and Chinese “Towns” in this small geographic area. Unique to Weaverville was the acceptance of the Chinese immigrants. Possibly because both the European and the Chinese immigrants had experienced war, and fueled by the area’s isolation, they developed a symbiotic relationship. The Chinese in Weaverville did not experience the same level of prejudice that the Chinese did in other communities. Their history and culture coexisted with those of the Europeans. Approximately 2,000 to 2,500 Chinese lived in Weaverville during the gold rush. This is not to say that conflict didn’t exist in Weaverville. In 1854 four factions in the Chinese community chose sides and went to war in the “Trinity County Tong War.” The war claimed 26* lives with many more wounded.

In every mining community from the Mother Lode to the Northern mining district there were Chinese miners by the thousands. Wherever the Chinese went they built houses of worship called “Joss Houses.” The word “Joss” comes from the Portuguese “Deus” meaning God. The phrase “Joss House” simply means “God’s House.” Most of the Joss Houses were destroyed and the Chinese residents were killed or driven out during 19th and early 20th Century purges. Only 4 gold rush era Joss Houses remain in northern California; Marysville, Oroville and Weaverville each has a Joss House and one stands in the bay area community of Hayward. None are as ornate or in as originally pristine condition as the one in Weaverville.

Weaverville’s first Joss House was built in 1853; it was destroyed by fire in 1861. It was rebuilt but was again destroyed by fire in 1873. The current, “Temple of the Forest beneath the clouds,” was constructed in 1874. Following the earlier catastrophic fires the roof of the new temple was adorned with 2 Chow Win Dragon Fish. The Dragon Fish offered protection against fire. The Dragon Fish were effective. The new Temple has remained safe from fire and has remained unchanged for 140 years.

To understand the layout and construction of the temple you need to know that traditionally, evil spirits don’t like water or bridges. You must cross a creek on a foot bridge to get to the temple. Evil Spirits can only travel in a straight line, hence the curved walk that leads to the Temple. On opening the Temple gates you step over a threshold; evil spirits cannot do so. Walking through the gates the first ‘doors’ you see are ‘spirit curtains.’ They are painted ‘doors’ that don’t open designed to confuse any evil spirit that had braved the creek, crossed the bridge, navigated the curved walkway and managed to get over the first threshold. To enter the temple you step over a second threshold and turn to the right or left at the ‘spirit curtains.’ Having entered the temple you will be rewarded with a magnificent display of original 19th Century Chinese silks, religious statuary, depictions of gods, and other 19th Century Chinese artifacts.

The priceless tapestries, statues, cymbals, drums, and other artifacts in the temple were lovingly cared for and maintained by trustee Moon Lim Lee from 1938 until his dream of the Temple becoming a state historic landmark was realized in 1956 when the Joss House was made a California Historic State Park.

The State Park Service now maintains the Temple and the grounds and provides expert, fun and informative tours of the Joss House for just $4.00 per person. The Park Service provides a well appointed interpretative center on site as well. The Joss House is a must see when you get On The Road to Shangri-La.