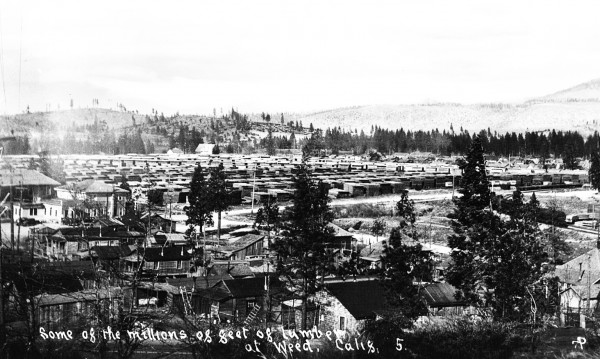 From the January 3, 1928 issue of THE SISKIYOU TIMES, an article entitled OUTLOOK FOR SISKIYOU IN 1928 EXCEEDINGLY BRIGHT IN ALL THE DIFFERENT INDSUTRIES…..caught my attention.

One of the most important projects listed for the upcoming year was the completion of the Montague Conservation District. Under its umbrella, thousands of acres were scheduled to be reclaimed and movements were “on foot to colonize the area embraced within the district…it is expected that many of the larger farms will be subdivided for the purpose of taking care of the added population. This project has entailed the expenditure of more than a million dollars.”

Another project scheduled for completion in 1928 included the Big Springs Irrigation District. It likewise proposed to take care of many acres of arid land and to increase the water supply to acres previously not supplied.

A third industry, the dairy industry, was growing substantially all around the county and the outlook was that “it is only a matter of time until Siskiyou will be the leading county of the state in this industry. Many new herds are being added to the different dairies in the county and the inferior stock is gradually being replaced with thoroughbred stock. Shasta Valley and Scott Valley are both particularly adapted to this industry.” So, it seems, that HAPPY cows in Siskiyou County during the 1920s and 30s were some of the earliest and happiest cows in California.

In support of the dairy industry, Kraft Cheese Company planned to make improvements to their plant in Grenada; in 1927, it had already spent $125,000 on new equipment. The proposed changes would make this plant “one of the best appointed that the company has in the West.” I wonder WHEN this plant was moved or taken down? Anyone have some more information or photos of said plant?

Of course, the timber industry was enormous during this growing period. According to the TIMES, The Southern Oregon Lumber Company expected to cut 15,000,000 feet in 1928; the McCloud River Lumber Company, “one of the largest in the West,” expected to increase its output significantly. The Weed Lumber Company had already made improvements at its plant and expected 1928 to be a banner year. In Butte Valley, six smaller mills were making plans for increased cutting and output in the new year.

Even mining felt a kick during this time period. As reported in the article, mines like the Golden Eagle mine on Indian Creek and the Shroeder mine on McAdams Creek, which had both “been idle for a number of years,” were showing excellent results. The old Black Bear Mine in the Salmon River country, “formerly operated by Lieutenant Governor Daggett, is to be opened up again. This was one of the best paying mines in Siskiyou in earlier days.”

Other mines in the region to be reopened in 1928 included the Nefroni group of mines and the Highland mines. Also, the Roxbury and Commodore mines on the Klamath River were expected to open and continue “with renewed energy.” In conclusion, the article stated that “the mining industry never looked more favorable in Siskiyou county than…at the present time.”

Other anticipated projects for 1928 included new roads. One, the “most important before the public,” was the Weed-Klamath Falls highway from Weed to the Oregon line. Also, a road from Grenada “south of Yreka to connect with the Pacific highway at Hornbrook, a distance of twenty-six miles,” was being mapped out.

The last area discussed in the article included a wrap up of building projects completed during 1927. Some of those named were: the Masonic Hall in Yreka, “one of the best appointed structures of its kind in the state,” a new grammar school and new bank in Dunsmuir, as well as $300,000 in pavement projects; a $80,000 new high school in Mt. Shasta; and a restored and rebuilt Montague Hotel, now deemed “a most commodious hotel with excellent service.”  ♦