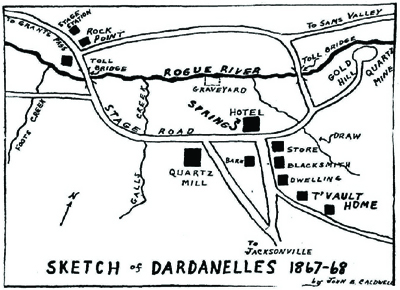 Oregon’s Umpqua Joe E Clampus Vitus Outpost, under the oversight of sponsoring Yreka Chapter Humbug 73, relocated and rededicated a plaque lost during the 1960s era construction of Interstate 5 and new overpass. Tom Daily, an Umpqua Joe member, brought the idea forward at a meeting about relocating an old historical plaque that had become overgrown by brush near a freeway exit. An expedition was mounted. Tromping through underbrush, Redshirts located the old plaque. Finding the original plaque presentation area and monument in disrepair and inaccessible to the public, members contacted the Oregon Governor’s office to gather information and permission. Many phone calls later resulted in the Oregon Department of Transportation agreeing to pull up the monument and place it in their maintenance yard for later ECV access.

Meanwhile, Outpost members began discussing the notion of placing the plaque nearby at the Dardanelles Store. Checking Jackson County court house records they found the people leasing the Dardanelles store didn’t own the property. Further investigation revealed the store owners name. Outpost members contacted him, receiving permission to place the plaque on his property. With the original plaque intact, the old monument base was removed. After all the research and phone calls by Keith Long, the Umpqua Joe monument erection crew was ready. Headed by Glenn Hearrell, with the help of Matt Perkins, Keith and Ruben Robles, the crew poured the concrete base for the old plaque and new rededication granite marker. Now the Outpost was ready to host their weekend Clampout Doin’s, plaque unveiling and dedication ceremony.

By the Friday night before the dedication things were jumpin’ at the Doin’s Clampsite. Umpqua Joe’s cook crew kicked off the weekend spring function with a feast fit fer large bellied Clampers. Chief Clamp Chef and Old Prospector Glenn “stumble” Hearrell served Umpqua Joe’s “Braves!” Brave Clampers then sampled a Friday five course chow down consisting of barbequed baby back ribs, salmon, Oregon oysters and Oregon red (chili) complimented by a nice salad. Yours truly did a little on the job trainin’ fer some of the young Bucks wantin’ ta know how ta cook up a hundred half shells or two of oysters. Gary “Gato Pelon” Kammerer and Ricky “Rickshaw Walks Naked With Dogs” Schrier did the oyster shuckin’. Hallelujah! Saturday morning rolled in with perfect sunny warm weather, unbelievable for Oregon that time of year. With barely time for breakfast, Wagon Master Zeke called the column of ECV vehicles together for a short march down Interstate 5 to the Dardanelles.

Looking back in time over 150 years ago, entrepreneur Davis Evans first promoted the area as Evansville in 1857 where he operated a ferry across the Rogue River at the Dardanelles. He later constructed the first toll bridge in the area. However, it was William Green T ’Vault who named the settlement Dardanelles. T ’Vault was a prominent southwest Oregon pioneer who started this settlement south of, and across the Rogue River from the present town of Gold Hill just upriver from Rock Point. At this point the river passes from the wider valley into a much more constricted section, with hills close on each side. Apparently this natural setting suggested the Strait of the Dardanelles to T ‘Vault, although it could hardly be more than a suggestion. The original Dardanelles gets its name from the city Dandanus.

Dardanelles, Oregon became a place of importance during the Rogue Valley pioneer days. Its post office was established October 19, 1852, with William G. T ‘Vault postmaster. T ‘Vault’s log home was designed with small holes all the way around it. The holes were just big enough to stick a gun barrel through to fight off the Rogue Indians. All of the Euro-American settlers would rush to T ’Vault’s home to seek protection.

T ‘Vault, a newspaper editor of prominence with a wide range of interests, was married to Ronda Boone Burns, granddaughter of Daniel Boone.

To view this plaque take Interstate 5 to southern Oregon. Use exit 40 and proceed to the west side of the freeway. About one hundred yards or so up the north side of the road is the Dardanelles general store. There in the parking lot you will find the plaque. Just up the road at Exit 43 is the Del Rio winery where you can also view the Rock Point Hotel and Stage Stop plaque.