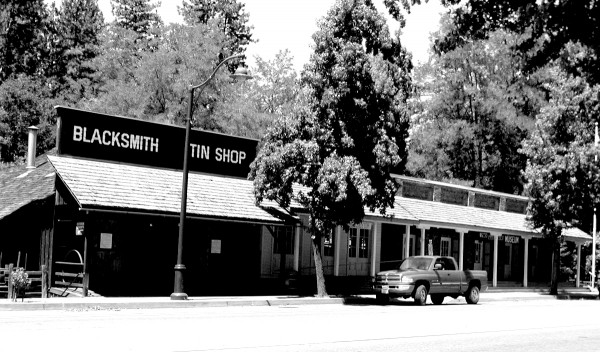 Photo of the Jackson Museum by Bob Pasero.

Those who know me will tell you that I’ve never met a museum I didn’t like. Yet, there are some museums that rise to a “higher level.” Today we will take one final look at James Helton’s Shangri-La, or, Weaverville if you prefer, and we will visit one such museum. Come along as we get On The Road to Shangri-La…one last time.

Weaverville was a very early gold rush city in the “northern mines” district. Gold was discovered here in 1849. Initially Weaverville was little more than a tent city but the surrounding creeks, rivers and hillsides continued to give up gold in significant amounts and the city grew. By 1852 the city had transitioned to wooden structures and suffered the nemesis of all gold rush communities – fire. The city would eventually rebuild with ‘fire proof’brick buildings equipped with “fire-safe” steel doors. A number of the historic gold rush era brick buildings remain in the historic district.

Weaverville’s 19th Century citizenry ranged from the wealthy, landed gentry of Europe (Baron and Baroness Le Grange) to miners from around the world. You can meet many of Weaverville’s early residents on the walking tour of Weaverville’s historic cemetery. There you will meet successful businessmen, miners and even Weaverville’s famous ‘Soiled Dove,’ “Madame Marie” Legogneur. As informative as the walking tours are, as beautiful and historically significant as the Chinese Joss House is, and as entertaining and enthusiastic as her citizens are, there is one place in Weaverville that is a must see on any trip to this community. I am referring to the “J.J. ‘Jake’ Jackson Memorial Museum and History Center.” The J.J. Jackson museum is one of those rare, “higher level” museums mentioned earlier.

When I am “working” (as I laughingly call my field research) I don’t call ahead or make special “arrangements.” I don’t want special treatment. Rather, I want the same experiences as a casual visitor would have. That way I can report honestly on the experience. I realized a long time ago that I was no Stanton Deleplane and that honesty, not exaggeration, was most important in my columns. (Stanton Deleplane was a Pulitzer Prize winning travel writer for the San Francisco Chronicle for over 53 years. He turned in his last column then passed away on April 18, 1988.)

On a recent trip to Weaverville I intentionally saved time for a long anticipated return to the J.J. “Jake” Jackson Museum, a jewel in the crown of the Trinity County Historical Society. This is no ordinary small town museum. It truly is a magnificent facility with cultural diversity, historical significance and one of the most complete libraries of didactic material to be found in any gold rush community museum.

Irish ancestors from my maternal Grandmother’s side settled in Trinity County during the 1850s. One day I plan a much longer visit specifically to research my genealogy.

The museum takes its name from early Weaverville resident J.J.“Jake” Jackson who, along with his brother, donated a substantial collection of early firearms dating to the pre gold rush era to start the museum. Originally, as with many small community museums, the exhibits were housed in the local Courthouse. However, the collection of historic documents, textiles, and other exhibits eventually outgrew the available space and a new facility was needed. The historical society set about assessing the needs of the exhibits, upgrading the textile storage facility, and expanding and rotating the exhibits. A “purpose built” structure was needed and in 1971 that goal was achieved. Today the J.J. “Jake” Jackson Memorial Museum and History Center stands as a model of what is possible through dogged determination, hard work, and a dedicated group of volunteers.

The Museum is a history center in every sense of the word. Casual visitors, those researching their ancestry, and historical scholars all will find their need for information fulfilled. The textile exhibit alone houses over 1,300 different exhibits ranging from garments and rugs to household linens, quilts, flags and banners representing various fraternal orders. Other exhibits housed in the museum include displays of Trinity County’s early mining, farming, ranching, transportation, Native American and Chinese history.

Adjacent to the museum is a fully functional blacksmith and tin shop. But my favorite area of the museum is outside of the museum building proper. Walking the museum’s grounds is like stepping back in time. A ditch tender’s cabin from the 1890s sits on the grounds. The ditch tenders were charged with maintaining the ditch that channeled water for what was, at the time, the largest hydraulic mining operation in the world: the LeGrange Mine. Every timber and board in the cabin was painstakingly numbered. It was then dismantled from its resting place on a hill overlooking Weaverville, transported to and reassembled on the grounds of the museum. The cabin is an open history book of the hydraulic mining period of the area.

Charles Bowles, better known as “Black Bart” attempted to rob the Weaverville to Redding Stage in 1880. His robbery was foiled when he discovered that the strong box had been bolted to the floor of the stage. That stagecoach, photo at left, one of two that ran the Weaverville to Redding route, has been painstakingly restored and is on display at the museum. The stagecoach can often be seen leading local parades and at other community functions in Weaverville.

Additionally, the only fully functioning stamp mill on the west coast, the “Paymaster” stamp mill, is housed on the grounds of the museum as is a functioning monitor (a large nozzle) used during the hydraulic gold mining era. A turn of the century portable saw mill was located, moved to the grounds and has been completely restored. It is fully functional and lumber cut with the saw mill is often used in ongoing restoration projects at the museum.

For a weekend getaway, Weaverville is the place to go. The folks in Weaverville will make you feel welcome and the city is a joy to experience. Perhaps I will see you in the history center as we get on the road to the J. J. “Jake” Jackson Museum and History Center in Shangri-La. ♦