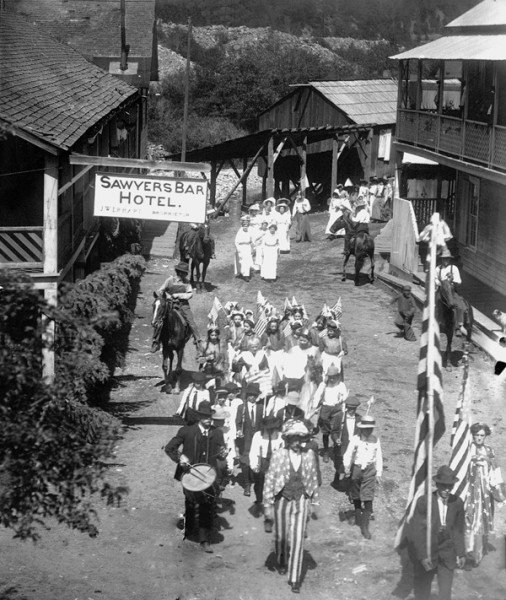 Tucked away between the mountain ranges of Western Siskiyou County lay communities that contributed substantially to the area’s economic development during the early years of settlement. Historically, of course, this land was home to thousands of native people prior to white contact.

One important stopping point along the North Fork of the Salmon River was Sawyer’s Bar. It served as a hub to other bustling settlements up and down the river and creeks. Here, Dan Davis, Sawyer’s Bar’s first blacksmith, sharpened picks on a big rock he used as an anvil, charging $1 per point. A. Trooks had a large store here in 1851.

Sawyer’s Bar remained an important settlement for another half century or more. One of its most interesting landmarks is the Catholic Church built on Paradise Flat. It is one of the few places within the Klamath National Forest to be listed on the National Register of Historic Places. The building dates to 1855, its construction supervised by a Benedictine Monk from Austria, Father Florian S. Schwenninger, who arrived in 1853. A devout man, he brought with him a painting of Christ’s crucifixion that still hangs above the altar. In addition, Father Florian built the altar himself. Now almost 150 years old, it is the oldest Catholic Church in Northern California and the second oldest church built in Siskiyou County. It has often been said that the small structure sits on the ‘richest’ piece of real estate since it is the only section of land around Sawyer’s Bar never to have been mined.

Other early Salmon River mining sites included: Forks of Salmon, located at the junction of the North and South Forks, was mined as early as 1850.

An important supply center, there was also a sawmill (constructed by – Johnson), a two-story hotel (constructed by – Long), bars, and a store. A post office was built in 1858. Early families residing here included the Bennett and the George families, whose descendants still work and live in the area.

Yocumville, established in 1856 opposite the mouth of Methodist Creek, also had a sawmill, built by J. B. Yocum and Joseph Ritner, and a flume that carried water to mines on the South Fork of the Salmon River. The first store and pack train was owned by Phil Dunphy. Here the Fyfield family owned and operated an inn and store that serviced miners and travelers. According to Lida Fyfield, “Our inn was very large – two stories in front and three in back…We had a large vegetable garden, berries, and many fruit trees. We raised our own beef and in the fall about one hundred hogs were driven in from Scott Valley, butchered, and made into hams, bacons, sausage, etc…All our (other) supplies for the store and house were brought in by pack trains.” All that remains of Yocumville today are some old rock foundations.

Petersburg, settled in the 1850s and 1860s, was, for a time, the largest settlement along the 16-mile stretch of the South Fork of Salmon River between Abrams at Big Flat and Cecilville. Built on a sunny gravel bar, it boasted a hotel, stores, saloons, a meat shop, blacksmith, sawmill, corrals, many residences, even orchards and gardens irrigated by water from nearby gulches and ditches. J. P. Jordan, with ranches at Rush Creek and Garden Gulch, supplied the town with fresh beef. Others who ran businesses or pack trains through here included Arnold Nordheimer, W. P. Bennett and his partner Peter Miller, Kist and Davis, George H. Sightman, George Green Brown, George Wohlfert, Francis Abrams, and Thomas McGinnis Brown who worked as sheriff of Klamath County for fourteen years.

A substantial Chinese community grew up at the lower end of Petersburg, the only section of the community to survive after being mined away by the Salmon River Hydraulic Mining Company at the turn of the century.

Somes Bar, located two miles above the mouth of the Salmon River, was settled by Abraham Somes around 1860. It thrived for 40 years but was eventually abandoned.

Lesser known sites along the Salmon River included: Summerville, mined almost exclusively by Chinese miners in the latter part of the 1890s; Gilta, serving both placer and quartz mines along Knownothing Creek; Rollin, not developed until the 1890s; and Shadrick’s, site of a Chinese camp, located at the mouth of Shadow Creek. ♦